The time-honoured pursuit of robbers by cops is reimagined for players’ enjoyment by NextGen Gaming in Bobby 7s, and the streamlined design of five reels and 25 paylines includes a variety of coin-value levels to enable as much betting flexibility as possible. There are a total of four mini-bonus features available as well, all of which appear often enough to boost bankrolls, and the game is compatible with Mac machines; is totally web-based; and does not require a download like online pokies.

Bobby 7s takes part of its name for the colloquial British term for policemen, and the theme for play reflects the title. All of the images that players will be presented with during the game have been rendered in a very enjoyable, cartoon-like fashion, and the reels themselves are set against the backdrop of a village silhouetted against sunset skies. Cartoon clouds drift across the moon, framing a black cat perched atop the reels and an old-fashioned police car displayed below.

NextGen has kept things simple as far as the icons for Bobby 7s slots are concerned, and players will be making use of fruits as far as the most basic of these go. A delicious wedge of watermelon is the most valuable of these, and this is followed by a scrumptious strawberry, a perfect plum, an appetising orange, a luscious lemon and two carnelian cherries to round off the list. An angry, animated policeman, or bobby, stands in as the standard wild, able to substitute for all of the other symbols except those of the judge; police and crook 7 bonus game.

A thrilling; silly musical medley plays whenever the reels are spun, and slot machine sound effects announce the wins. When the Bobby 7s wild icon has been activated the sounds of a police siren will screech across the reels, and the policeman starts his chase for the criminal, frantically waving his baton.

NextGen has included a number of very enjoyable features for Bobby 7s slots, all of which are guaranteed to help the player maximise his potential profit whenever he chooses to take these reels for a spin.

Free spins are triggered when the masked thief icon appears on the first; third; and fifth reels simultaneously, and players will instantly be awarded with a multiplier of two for his or her bet. Selecting one of these bandits will reveal the amount of complimentary spins the player is able to enjoy, and all prizes will be doubled during this portion of play right here. The free spins can be retriggered, and any of the Bobby 7s bonus games are available as well. 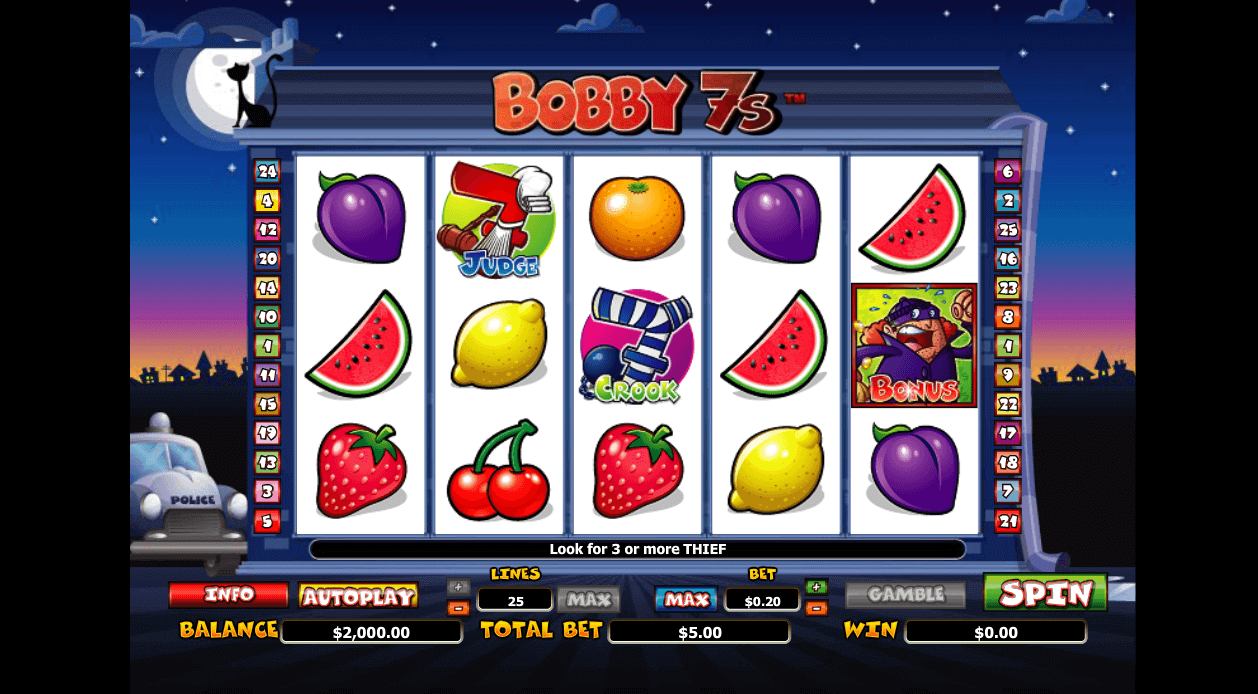 Bonus rounds appear regularly during play, all represented by the icons bearing the lucky number seven. The Crook feature, a black-and-white prison-striped seven replete with a ball and chain, appearing on the third; fourth and fifth reels will award up to 40 times the players bet; the Police feature, a blue seven with a siren on its head and handcuffs in the background, appearing on the first, second, and third reels at the same time will reveal a cash ladder game; and the judge feature, a red seven with a white wig, judge’s robes and a gavel, will offer players multipliers of up to five for their bets when he appears on the second; third and fourth reels at the same time.