Brought to you by Next Gen games, the Call of the Colosseum slot game is now available to play online. It draws from the well known tradition of ancient Roman gladiators, which is not an especially popular theme for slot games. This means that there was a lot of potential for Next Gen to offer players something truly unique. Let’s see how the game stands up.

The Call of the Colosseum slot game is certainly not the best work of Next Gen, who is known for delivering some truly excellent games. The graphics of Call of the Colosseum are extremely bland, the images low resolution, and audio design all but nonexistent. There are some animations for the play symbols, but even these are basic and uninspired. Slot games, however, are not all about the graphics, and in the game play department Call of the Colosseum does a whole lot better.

The Call of the Colosseum slot game uses a 5 reel, 25 betting line system. The betting lines are manually adjustable like many other real money slots paylines, giving players a chance  to take a strategic approach to game play. This in itself already makes the game an interesting affair. The special feature of the game, titled Thumbs Up, further adds intrigue, resulting in a game that is certainly worth a look.

The call of the Coloseum has already been said to not have the most impressive graphics, but let’s look at some of the standard symbols and their values. The most valuable standard symbol is an unnamed Roman woman, who seems to be holding a red rose and looking more then a little frisky. She grants an excellent payout if matched the maximum of five times.

Some of the other symbols are a tiger, a pair of sandals, a chariot, and a shield. The least valuable symbols are the bunch of grapes and coins. It is a plus that Next Gen avoided using the standard playing card numbers, but a shame that the symbols are not more creative or colourfully designed. If anything the symbols could at least have shown a bit of gladiator fighting, which you would imagine would be the focus of a game about gladiators. 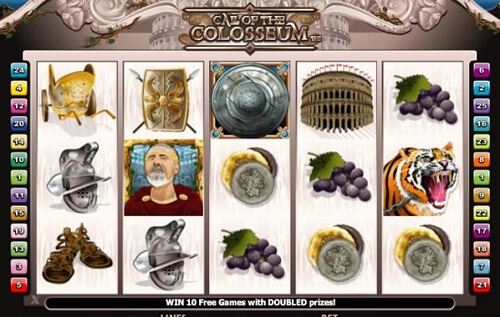 Thumbs Up or Down

Upon the scatter symbols being matched, pictured as a battered shield, the player is granted 10 free spins. These spins will play out automatically. However, if an emperor symbol lands on the reels during any of the spins, he will give either a thumbs up or thumbs down. A thumbs up means that 3 more extra free spins are granted to the player, in addition to those already standing. This unique feature is extremely tense and exciting, creating a free spins game that stands apart from most other slot games.