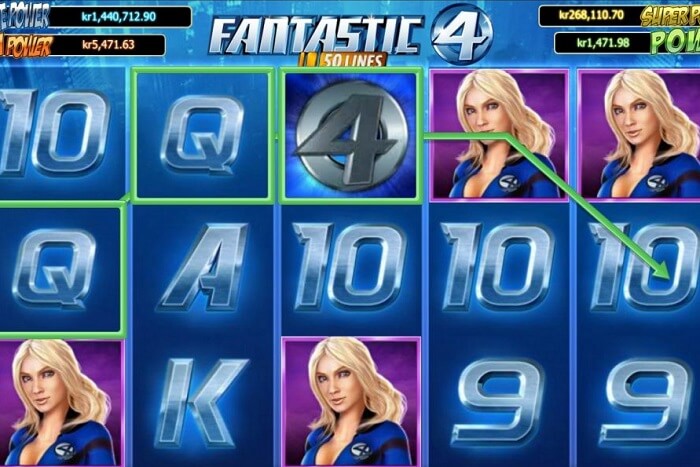 Playtech has teamed up with Marvel to create some very successful superhero-themed slots, and Fantastic Four is among the best of these. The 5-reel game offers up to 50 paylines, and can be played for 0.01 to 500.00 per spin.

This should easily accommodate the budget of every player, but it is also possible to spin these reels for free. This is helpful for players who want to practice and build confidence before staking real money, or who just want to relax and enjoy the game without any financial pressures.

When you are playing for real money, the Top Jackpot in the base game is an impressive 10,000x the total stake. The theoretical RTP is 95%, so players will all want to maximise their winning opportunities when spinning for real money.

The convenient AutoPlay feature makes this possible, and keeps the reels turning on their own while you carry on with other things on busy days. This won’t be as enjoyable as playing manually, but it does mean that you don’t have to miss any payout possibilities.

The 4 characters who were exposed to gamma rays and developed special powers in the story all make an appearance. They make up the higher-value regular symbols, and in order of ascending value are the Thing, the Human Torch, the Invisible Woman and Mister Fantastic. The lower-value icons are Playtech’s usual playing card symbols, done in the same font as the game title.

The background music is suitably thrilling, and should definitely put players in the mission-completing mood. The dark blue of the reels and background add to the feeling of slick sophistication of the game, and helps players to keep their focus on the game.

The Wild Symbol is the game logo, and can substitute for any reel icon except the Scatter which takes the form of the earth. When 3 or more of these are seen scattered anywhere on the reels at the same time, a Bonus Round of 12 Free Spins is activated.

This Bonus is taken further than in many other video slots by an extra Wild Feature. The main Fantastic Four characters can appear on Reel 3, and can cover the whole thing. When this happens, players will get 3 extra spins if the character is The Thing, and 4 extra turns for all the others.

In addition, these characters on the third reel also each award a special bonus. The Human Torch gives extra Wilds, the Invisible Woman increases the multiplier, and Mister Fantastic and The Thing delver expanding and frozen Wilds respectively. This makes the Bonus Round more lucrative, and more thrilling to play.

The Progressive Jackpot that ties all of Playtech’s Marvel slots together is the final element of excitement in the Fantastic Four game. Its theoretical RTP is 91.99%, and anyone playing for real money is eligible to win any of the randomly-triggered Progressive prizes.

There are, appropriately, 4 of these to be won at any time – the Power, Superpower, Extra Power and Ultimate Power Progressive Jackpots. Landing these can be life-changing, and should make winners feel like superheroes in their own right.