Ghost Pirates is a horror-themed online slot that displays impressive imagery of a popular nautical quest that follows a young couple in love and their treacherous meeting with a dark and dangerous pirate ship.

Players are immersed into an oceanic setting filled with romance, ships, pirates ghosts and much more. The audio is reminiscent of the backtracking to a typical pirate adventure and includes a multitude of sound effects, including the odd laugh or groan from one of the interactive characters.

The online slots have 5 reels, with 20 reels and 243 ways to win, as well as a generous amount of bonus features. Among the many bonus features are stacked wilds, scatter pays, free spins and bonus games.

Ghost Pirates follows a theme that remains consistent throughout the game’s interface, with the background featuring hand-drawn maps and navigation instruments, as well as a ship deck for some of the animated characters to rest on, and ultimately interact with players, during game play.

The controls are easy to use and come fully decked in Ghost Pirates’ theme with each button being a different icon, including a chest, a skull, dynamite and more. Using these buttons, players can select paylines, set coin values, choose the number of coins per bet, spin the reels, place the maximum bet allowed and more.

The symbols in Ghost Pirates further highlight the steady theme, with each symbol displaying its very own tribute to the tale. These symbols are made up of higher value symbols, bonus and lower value symbols.

The wild is a young man playing an accordion who, when landing on the middle reel, becomes stacked and increases chances of big wins. 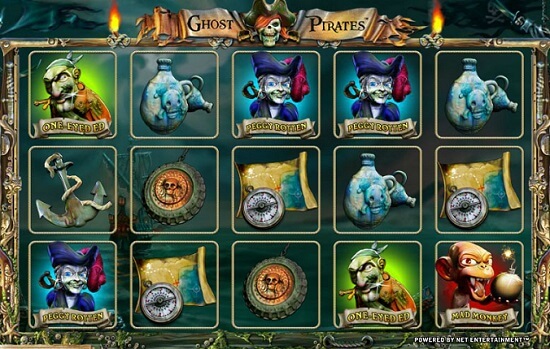 Ghost Pirates is essentially split into two different modes during gameplay. When 3 Ghost Mode symbols appear on the reals, all symbols turn into a dead version of themselves and the animated ghost pirate then comes in to observe the reels spinning.

During Ghost Mode, any treasure chest winning combination will be doubled. When 3 Pirate mode symbols appear on the screen, the mode then switches again.

Throughout the base game of Ghost Pirates, players can collect keys in order to access another bonus feature. When 5 keys are collected, players are taken to another screen where they have to pick the correct door to reveal a prize. If the door has a treasure chest the player can pick again, however a skull ends the game.

When 3 or more target practice barrel symbols appear players are taken to a separate screen where a bonus game awaits. The aim of the game is to hit the target and beat the opponent to win.

If a player spins 3 coin flip bonus symbols then they are again taken to another screen where they are prompted to call heads or tails – and if correct the player may guess again.