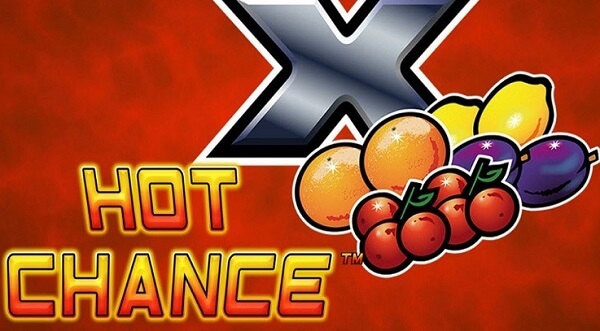 The Hot Chance slot by Novomatic has been designed with slots purists in mind; the old-fashioned players who enjoy the limited options that were a feature of the original slots, but which result in bigger prizes when matches do occur. With its bright primary colours and boxy layout, featuring limited symbols on only three reels with only 5 pay lines, the Hot Chance slot by Novomatic is reminiscent of the original mechanical fruit machines; extending to its familiar electronic slots music of burps, beeps and bells.

Players can bet any number of pay lines between 1 and 5 on the Hot Chance slot by Novomatic, but with only three reels and a match of three symbols required to win any prizes, it makes sense for players to bet on all 5 lines for every spin. If budget is a consideration, players can wager as little as 2 coins per line. The maximum bet is 2,000 coins per line. Prizes listed here are based on a bet of 2 coins per line.

Only Eight Symbols in Play

Unlike many other slot titles present in the market that use more than 10 ordinary symbols as well as several special icons, the Hot Chance slot by Novomatic uses only eight icons in total, reducing the odds against the player a little. Most icons contain a matching pair of symbols, but these still count as a single icon in combos. The exception is the steel X symbol, the lowest-value icon, which occurs singly and pays 10 credits for three matches.

Four doubled fruit icons: cherries, lemons, oranges and olives, all win a prize of 80 credits for three matches, followed by the bars icon, which wins 120 credits. Double stars win 400 credits for three of a kind, and the double Lucky 7s win 1,500 coins.

In keeping with its retro no-frills theme, there is no Wild icon used in the Hot Chance slot by Novomatic. The title also does not pay small consolation prizes for a mixture of any bar icons across all three reels, as many fruit-machine style games do; the only bar icon contains two bars, and players must match three icons on a pay line to win.

The Hot Chance slot by Novomatic also has no Bonus or Scatter icons, as there are no free spins or bonus games to be triggered by them. As with the early slot machines, players can only win prizes by matching three symbols on the same pay line, although there are opportunities for them to enhance these prizes. In addition, the limited number of wins available are offset by larger-than-usual prizes on all matches.

One plus that does count in favour of the Hot Chance slot by Novomatic is the presence of stacked symbols. Any fruit symbol can arrive stacked to fill the entire reel, and matching stacked reels can also line up next to each other. When this occurs, all nine windows on the reels can end up filled with a matching icon, for a total win of 400 credits over the 5 pay lines.

However, if this occurs, it also triggers the Hot Chance slot by Novomatic’s one bonus: the Hot Chance Feature. The player can choose to gamble the win up to three times, winning 2X, 4X and eventually 8X the prize if they are successful. This involves guessing a suit colour on a single card for each gamble, however, so they also have a 50/50 chance of forfeiting the win.