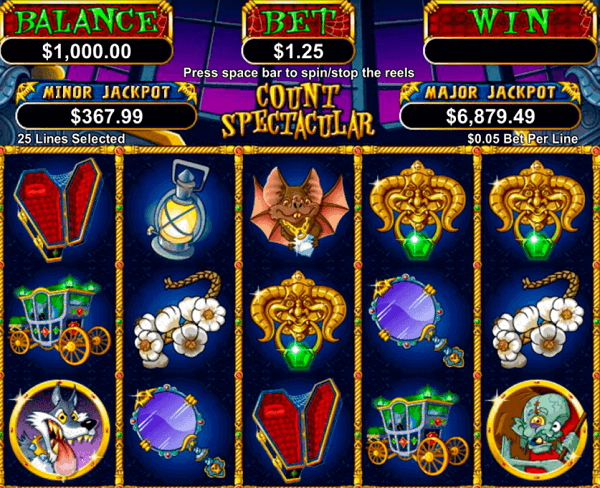 Count Spectacular is an online video slot developed by RTG.  If you have at any point been intrigued by the world of vampires, but not necessarily the creepy factor it usually entails, then Count Spectacular will appeal to you.  It’s a cute and quirky version of a previously scary theme, and features colourful graphics and spellbinding animations.

The interface is very easy to navigate.  This makes playing Count Spectacular a highly enjoyable experience, without the nuisance of having to figure out complicated functions and information.

Count Spectacular can be played for fun and free, or for real money. A mobile version of the slot is also available for players on the move and the game has been optimised to run smoothly on tablets and smartphones powered by iOS, Android and other preferred OS.

Count Spectacular symbols include a mansion on a hill, a string of cloves of garlic, a sneaky-looking wolf, a lantern, coffin, a hand-held mirror, a frightened woman, bats and Count Spectacular himself.

The aim is to land a winning combination of 3 or more matching symbols on an active payline.  A combination of 5 of the frightened woman symbols will add a tally of 2 500 credits to the player’s kitty, and 5 of the wolves will increase winnings by 750 credits.

The Count Spectacular wild symbol will at random times expand to cover the entire reel on which it appears.  If this happens on reels 1 and 5 during any one spin, the special Free Spins Bonus Round feature is activated.

The free spins bonus round is activated by landing the expanding wild on both reels 1 and 5 during a single spin.  The player is then offered a choice between 4 free spins, with the wilds remaining in place, or 12 ordinary free spins.